When will my baby start signing? This is the question we get asked the most and is the hardest question to answer because each baby will have a different signing experience. A rough guide would be that if you started at six months, then typically it will take two months to see the first signs. If you started later, at twelve months, then you would typically see signing within around one month.

These are, of course, very rough estimates. Some readers’ babies sign at 4 months and some readers’ babies start signing at 18 months, but most of us are somewhere in the middle. In general, girls sign a little earlier than boys (mirroring their faster verbal trajectory) but again, there are plenty of exceptions.

Signing comes in stages. In today’s video, we are going to look at the five stages of signing: Recognition, Imitation, Understanding, Initiation, and Combination. Knowing these stages will help you gauge your progress and help you spot areas for further development.

Signing vocabulary typically starts with a few words with initial progress being slow. A six month old may only add a new sign every week or two. However, as the baby’s developmental window for communication opens, you will see an explosion of signing. At this time, children can often acquire new signs every day. They will often start asking the sign for everything they see, so be prepared! 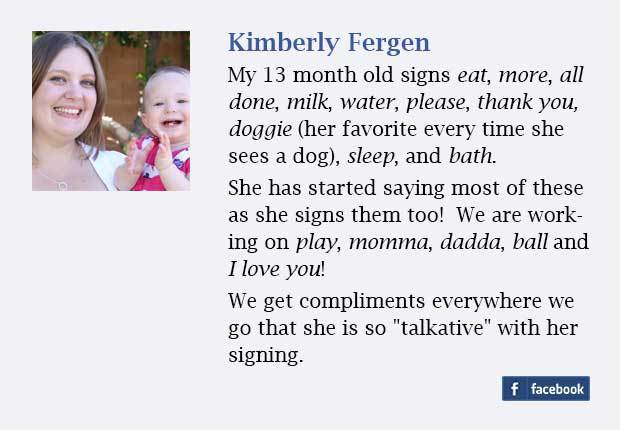 New signs are often learned in clusters. For example, animal signs like dog, cat, cow, goat, chicken, lion, and tiger or transport signs such as car, bus, train, and boat.

It is worth remembering, just like every other aspect of child development, babies will acquire new skills at different paces. This is just the natural way. In the same way that some children are early walkers and other children are later walkers, but all children end up walking. So too, some children are early signers while others are later signers, but all eventually end up signing. This should be no cause for alarm – they will sign eventually and when they do, they will usually develop faster and quickly catch up to their earlier developing peers.

Tomorrow we are going to discuss how you make use of support from family, friends, and caregivers to teach Baby Sign Language.

Have your own parents ever told you about what you were like as a baby? Tell us in the comments how your development was unique.

One Response to “Part 3: When Will My Baby Start Signing?”