This week Elliot and his mom Kayleigh tell us their signing story. 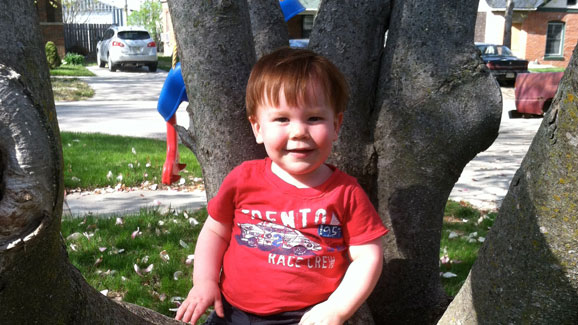 Picture: Elliot Hanging Out in a Tree

My son Elliott is just over a year (16 months-old to be exact!) and has quite a good sign vocabulary.

We started on signing just at 3 months. We knew he wasn’t going to be able to sign back right away but we decided it was something we wanted to stick with.

Elliott started having troubles with bilateral ear infections when he was 4 months-old and by the time he was 1 year-old we had to go get tubes. The ENT told us earlier before he was old enough to have surgery, that what he was hearing was what we would hear under a small amount of water that’s how bad his ears were.

We were happy at that point that we decided to sign so we were able to communicate with our little guy.

He started signing when he was 9 months-old: milk, more and eat; and since then he’s built onto that list: please, thank you, change, diaper, poop, water, help, smart, ball, sit, the letter “E” since his name is Elliott and dog. I’m sure there is more that I am forgetting.

We are thankful that every day we chose to sign with our baby boy. We are able to communicate with him in a way that has helped temper tantrums come to a close and when we are in an intimate setting at a restaurant and he wants milk or something to snack on he signs to us and it’s a lot easier and less noisy for us to communicate to one another.