This week Julia and her daughter Amelie join us from New Zealand. Julia shares her story of raising Amelie bilingual (French & English), and doing Baby Sign Language. Check out the video at the bottom of the page, it is hilarious!

I’ve known I would do baby sign since before I was pregnant. I never met any babies doing it, but being a speech language pathologist I knew plenty about how well it worked in pre-verbal children to reduce frustration and I also knew just how much ‘language’ our little babies have in them. What I didn’t plan on was raising her bilingual as well. That came after we picked up French hitchhikers and both being English-French bilingual ourselves (living in New Zealand and dreaming of France) thought – why not speak French to Amelie now?! Not wanting to wing it, I took out some library books and we made the decision to jump in while she was still only 4 months. While it felt like a leap into the unknown I took heart in knowing that whatever confusion or language delay bilingualism may cause to start, she would have her baby signs. We speak to her in French, and sign, and she is learning English more passively from the world around her … apart from everyone being gorgeous and wanting to use their French with her whenever possible such as Bonjour! and Au Revoir! And they do the signs as well. She’s a well-known baby in the village and the old ladies delight in her baby sign manners. 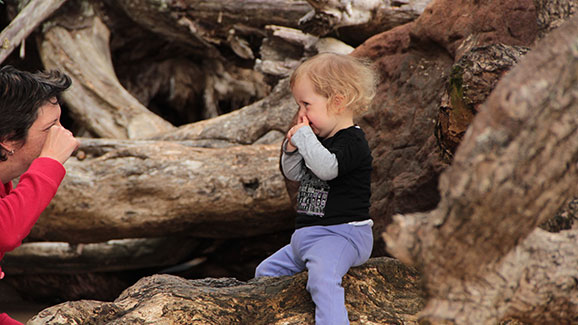 The signing was easy for us. We printed the core photos and put them on the fridge. I can’t remember exactly when her first sign was, 9 or 10 months maybe? – it was milk. Quick and fleeting, but certainly there and easy to reinforce. Looking back we realize it was earlier than that – with finished. But it was so uncontrolled and flappy we didn’t recognize it! I can recall thinking, “that’s a bit autistic… do all babies to that?” Oops. From there the concept was cemented and we were away. She was signing from the minute she woke and we were jogging our brains for what that one was! She’s also a bit of a sloppy signer so not everything was completely clear straight away. I remember when chicken, ouch and iPad were all the same! Then something difficult happened around her first birthday – we weren’t keeping up with her thirst for more signs so she began making up her own! Suddenly she had her arms in the air, was pinching her fingers and twisting her wrists … what? What’s that?! ….. Letters? The fridge magnets?? Says who? Says Amelie – and so it stuck. 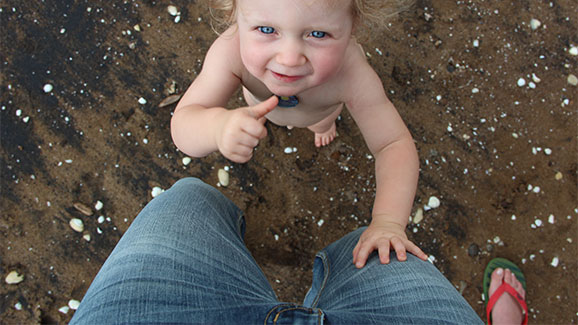 After a few more of those occurrences we bought a dictionary and got proactive. If we talked about it, we gave it a sign. And she loves, loves her signs. Just the same as toddlers that parrot back what you say, she was signing back everything I was reading and talking about or simply labeling her environment. We always found it funny when she made this huge effort to put everything down, normally topple over in the process, and do a sign for something she was carrying. But her delight when we then said the word and signed it back was unmistakable. She’d laugh as though to say, “Yep! Well done.” and pick everything up again and continue on. Our favorite signs though have been for the names of all the French travelers who have stayed with us and helped look after her. From Boris who smokes, to Caroline and her jewellery. What a beautiful way to greet someone – by name. And all of these people have left determined to do baby sign with their own children one day. 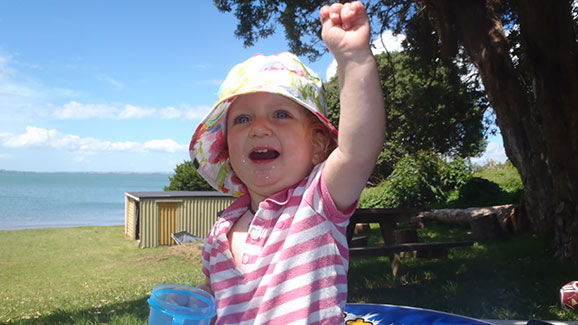 Picture: Signing by the Sea

So now, at 20 months, Amelie is a delightful and chatty little French speaker who has started to use two word phrases. And I thank baby sign every day because we all still rely heavily on her signs to communicate as she speak-signs the complicated and lengthy syllable structure of French. And we’ll continue to use it as English makes its way into her everyday language to back up meanings and draw connections between the two languages. But most of all I thank baby sign for helping us raise a happy and confident toddler. My heart swells with love and pride when I dream about her start in life and being able to communicate with the world as soon as she had something to share. Long may it continue in as many languages as this trilingual toddler chooses to embrace.